TRIGEMA Inh. W. Grupp e.K. with its headquarters in Burladingen, was established in 1919 and is Germany’s largest manufacturer of sportswear and casual fashion. The company supplies top-quality sports and leisurewear, as well as underwear and nightwear for women, men and children. TRIGEMA and Wolfgang Grupp, owner and managing director of the company in the third generation, are committed to state-of-the art production technology and social and economic responsibility. The company wants to retain jobs in the local economy and therefore solely operates production facilities in Germany. 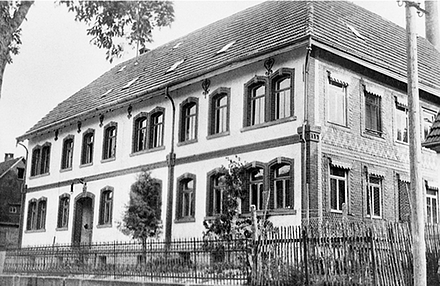 Around the turn of the century, the Swabian Alb region was on the edge of the development of a vibrantly growing textile industry. There was hardly a community in the Hohenzollern region that was influenced largely by this structural change than Burladingen. Mechanische Trikotwarenfabriken Gebr. Mayer KG have been one of the most important companies with a share in this development since the day they were founded.

In November of 1919, the two brothers, Josef and Eugen Mayer, purchased an abandoned factory in Burladingen. This was a brave step given the many economic obstacles that needed to be overcome in the post WW1 era.

The two brothers benefited from the profound skills they acquired from their father Johann Mayer. Running a humble knitwear production plant, Johann Mayer was considered a pioneer in Burladingen’s textile industry. In 1922, the brothers started going separate ways: The existing business was divided, and Eugen Mayer started his own company named after himself. In contrast, Josef Mayer continued operations at Mechanische Trikotwarenfabriken Gebr. Mayer KG as the sole proprietor and was now able to fully develop his entrepreneurial talent. 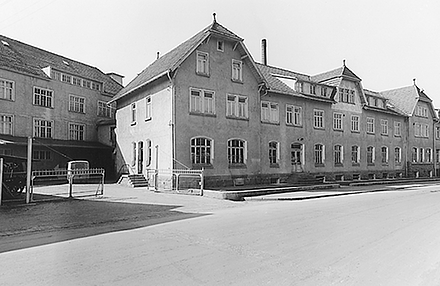 Unlike his competitors, he quickly overcame the years of inflationary chaos and thereafter, started supplying the leading German commercial enterprises of the time with underwear. He started the business off with 25 employees. However, it took him less than five years to increase his staff to 150 workers and seamstresses.

The rapid rise to success of Mechanische Trikotwarenfabriken Gebr. Mayer KG resulted in a continuous expansion of the Burladingen plant in the 1920s and 1930s. In spite of the economic crisis Germany experienced in the early 1930s, the demand for underwear rose, resulting in full order books and a rapid depletion of the local labour market. This made it necessary to open new production plants.

These plants allowed the workers living in the region to work close to home – a benefit of great value given the poor infrastructure, which made it impossible to cover longer distances to reach Burladingen. The expansion resulted in the opening of five plants in the vicinity over a period of two decades: 1923 in Ringingen, 1926 and 1927 in Steinhilben and Trochtelfingen, and, by the end of the 1930s, in Hechingen and Rangendingen.

In a short period of time, Josef Mayer managed to expand the business of Trikotwarenfabriken into that of a successful, large-scale operation with 800 employees. 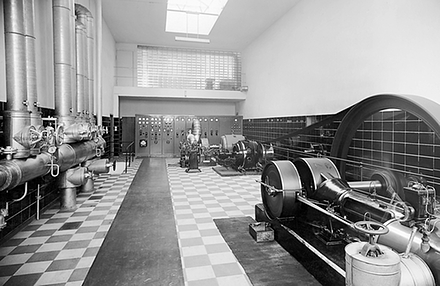 1932 saw the creation of spacious production buildings including a bleach plant, a dyeing shop and a steam plant with generator. This installation allowed the company to produce most of its own electric power. Even back then, the company employed machinery that utilized the latest technology and applied efficient methods of operation. 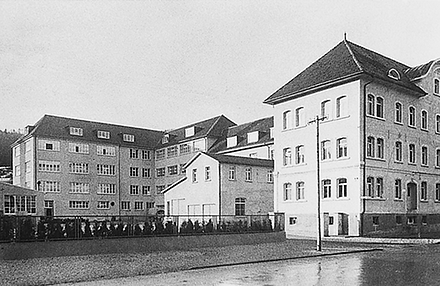 The war years were marked by a devastating decrease in work force and production volume. The dismantling of the entire state-of-the art machine outfit following the end of the war brought about immense losses.

TRIGEMA and Wolfgang Grupp have commissioned an independent team of historians to work on the company's history in January 2021. The team has a completely free hand in the research. The research will be incorporated into a scientifically viable report. 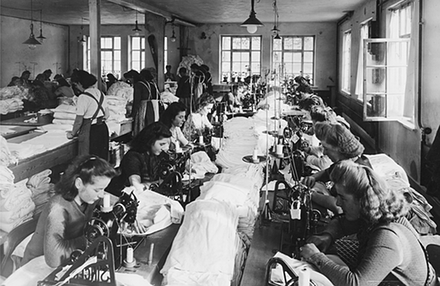 The production of underwear was the first branch of the operation that resumed on a small scale. It was not until the currency reform of 1948 that the company saw a rapid growth of its workforce and a significantly stronger position in the marketplace.

The 960 employees that worked for Mechanische Trikotwarenfabriken Gebr. Mayer KG in 1952 represented 20% of those employed in the textile industry of the Hohenzollern region and produced 4% of all underwear made in West Germany.

The company added a new administration building and additional production facilities in their anniversary year of 1949 as well as a new boiler house in 1951. The social benefits for all employees improved significantly, when a company health insurance was founded and a company physician practice was established in 1950. 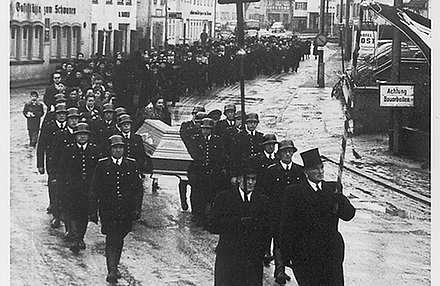 The year 1956 brought along sad memories in the company’s history. On 30th November, senior partner and company founder, Josef Mayer, died. Only a few months earlier, he had been awarded the German Federal Cross of Merit (First Class). The company he left behind was a successful company, which owed its remarkable size to its founder’s untiring diligence and magnificent entrepreneurial spirit.

Representatives from the fields of politics, business and culture attended the funeral service. The entire workforce and the citizens of Burladingen bid farewell to the popular entrepreneur. 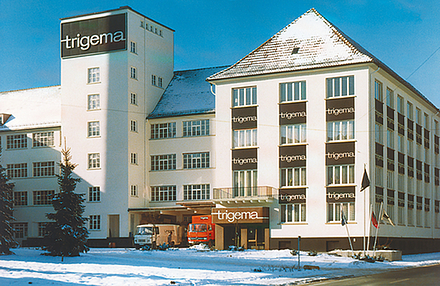 The founder’s son-in-law Dr. jur Franz Grupp now managed the company. Director Graf, who joined the company as a commercial apprentice as early as 1919, the year the company was founded, assisted him. 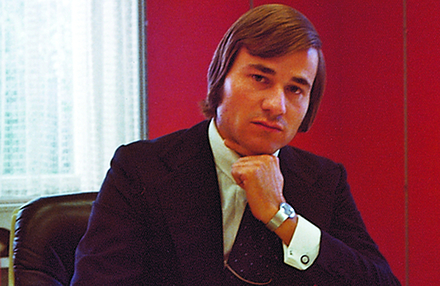 Dipl.-Kfm. Wolfgang Grupp took over the management from his father Dr. Franz Grupp in 1969. Flower power sloshed over. The T-shirt became a symbol of youthful fashion alongside the jeans. Wolfgang Grupp focused on the current trend and successfully started a new phase of the company. He established the T-shirt and tennis clothing division under the brand name TRIGEMA. Through his restructuring, Wolfgang Grupp transformed the traditional tricot factory into a production facility for fashionable leisurewear. For the creative implementation of new ideas, he set up a new design department.

When Wolfgang Grupp took over the management, the company was highly diversified. Following the example of his successful grandfather, he returned to the roots and abolished the oversized diversification. With great success, because by 1975 he had increased turnover to 28.1 million and repaid the debts in full. Since 1975 TRIGEMA has been Germany's largest manufacturer of sports and leisure wear.

In the years 1973-1977 the existing buildings were modernized and new buildings were added. The open-plan office at the main plant in Burladingen was completed and the equipment expanded. The TRIGEMA Sports and Leisure Centre in Burladingen and the clothing factory in Altshausen were newly built. 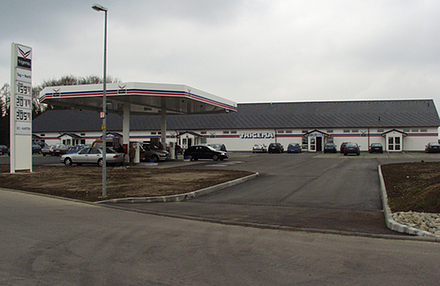 The years 1981-1992 also saw a number of improvements and new constructions. In 1987 the boiler house was newly constructed and the energy supply was switched from oil to gas. Ever since, TRIGEMA’s headquarter, including the 4-stage production, runs on 100% autonomous energy supply. The finishing shop, cutting room and printing shop in Burladingen and the plant in Altshausen were refurbished and extended. Since then, TRIGEMA has its own petrol stations at its plant locations in Burladingen, Altshausen and Rangendingen. 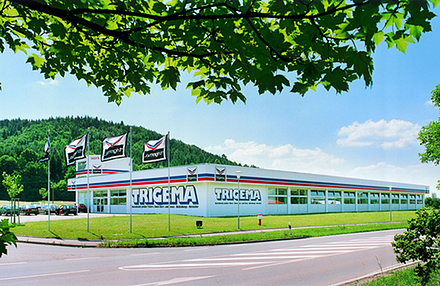 The new plant in Rangendingen was opened in 1993. The sewing department and the test shop in Burladingen were newly constructed in 1998-2000. In 1984, the first test shop was opened in Missen-Wilhams in Bavaria. In the following years, the number of test shops was expanded 45 shops. They are located throughout Germany, mostly in holiday destinations or close to motorways.

In 1995 Wolfgang Grupp was awarded the “Auge mit Durchblick” for the best management idea by the television program IPSO which is hosted by Hessische Rundfunk. In 1998 he was awarded the Stauffermedaille in Gold, for his merits towards the federal state of Baden-Wuerttemberg, by former Minister-President Erwin Teufel. In 2002, on occasion of his 60th birthday, he received the “Ring of Honour of the Town of Burladingen” for his services to his hometown Burladingen. In the same year, the street where TRIGEMA has its headquarters, was renamed “Josef-Mayer-Straße” in honour of the founder Josef Mayer. 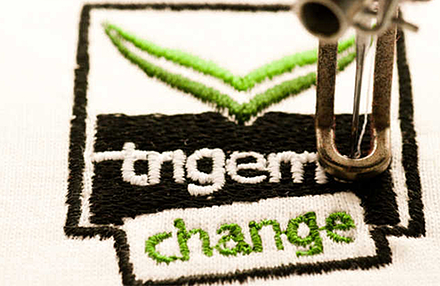 Over the years, TRIGEMA has expanded its presence. Since 2004, the company has its own online shop and in 2005, the first store at an airport was opened at Stuttgart airport. In 2005 the remodeling of the conference and hospitality room was completed and TRIGEMA started offering guided factory tours with hospitality.

Manufacturing clothes in an environmentally conscious manner has always been TRIGEMA’s focus. In collaboration with the environmental institute EPEA, TRIGEMA developed the first biodegradable t-shirt, according to Cradle-to-Cradle standards, in 2006. This t-shirt was exhibited in the German Pavilion “Balancity – Stadt im Gleichgewicht” at the Expo in Shanghai in 2010. The employees of the pavilion were dressed in TRIGEMA Cradle-to-Cradle shirts and at the end of the Expo these shirts were buried on the premises, in the spirit of the Cradle-to-Cradle principles. The biodegradable collection, made of 100% organic and GOTS certified cotton, is sold under the brand name TRIGEMA Change. This new TRIGEMA Change collection was presented at the Greenfashion Week in Berlin in 2012. Irrespective of the Cradle-to-Cradle guidelines, TRIGEMA also follows a strategy of expanding the use of renewable energy. Since 2008, TRIGEMA uses solar panels on roofs for its own energy usage.

In 2004 Wolfgang Grupp is honoured for his responsible commitment to the German textile industry and to the production location of Germany with the Max-Kehren-Medal by the Verein Deutscher Textilveredelungsfachleute e.V. In 2005 he is awarded the German Federal Cross of Merit by the former Minister of Economic Affairs of Baden-Württemberg. In the same year he receives the “Cicero Rednerpresi 2005” by the publisher Verlag Deutsche Wirtschaft AG, for his exceptional rhetorical performances in the category “Economy”. In 2012 the Minister-President, Winfried Kretschmann, honours Wolfgang Grupp with the “Große Stauffermedaille in Gold” for his duties towards the industrial location of Baden-Wuerttemberg. On the occasion of his 70th birthday, he is awarded the “Honorary Citizenship” of his hometown Burladingen. 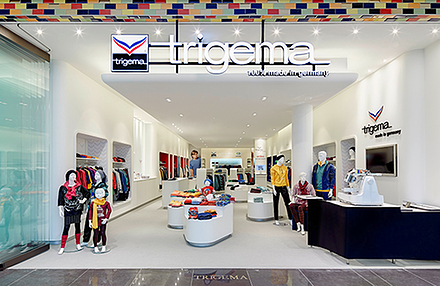 Since 2013, the next generation is also part of the company. Bonita Grupp (E-Commerce) and Wolfgang Grupp jun. (Sales) joined the family business, after completing their Master Degrees at the London School of Economics.

In early 2014, the shop at Stuttgart Airport was completely refurbished and only a few months later, TRIGEMA’s first flagship store opened in September 2014 in the Mall of Berlin and is located at Leipziger Platz in Berlin. The TRIGEMA Online-Shop received a complete makeover in the same year and after further adaptation in technology and design in 2017, the shop is now fully responsive on any terminal.

Furthermore, TRIGEMA clothing can be purchased through a number of online partners worldwide. The presence of TRIGEMA in social media channels has grown over the years and the company can be found on Facebook, Twitter, Instagram and Google+. TRIGEMA launched its own company blog in July 2015.

On 14th November 2014 TRIGEMA was awarded the Cradle to Cradle® Products Innovator Award 2014 in New York.

In 2015 TRIGEMA aired its new TV advertisement. The aim of the new advertisement is to promote TRIGEMA’s sustainable production 100% Made in Germany and to place a stronger focus within the advertisement on one of the favourite TRIGEMA products, the classic polo shirt.

A new form of advertisement was introduced in 2016, when the TRIGEMA-branded airship had its first appearance at the DFB Cup Final on 21st May 2016 at the Olympic Stadium in Berlin.
TRIGEMA uses cookies and similar technologies to provide you with the best possible service. In addition to the technical dependence of our shop on cookies, these are used to display personalised content and for statistical, tracking and marketing purposes. Please click on "Accept all" to allow us to use such technologies. Without consent, we will only use the technically required cookies. For the display of personalized content as well as for tracking and marketing purposes, we store information such as browser type, operating system, time, IP address, etc. and transmit this information in anonymized form to our marketing partners (e.g. Google, Facebook, Kameleoon). You can adjust the declaration of consent via "Personal settings". Your consent is voluntary, not required for the use of the website and you can revoke your consent here at any time with effect for the future. Revocation of consent does not affect the legality of the processing that has taken place on the basis of the consent until revocation. Further information on the use of cookies and on the subject of data protection can be found in our data protection declaration.
Legal notice Privacy policy
Settings Accept all